PROTECTION IN THE EVENT OF PRODUCT RECALL

Manufacturers can be obliged to prevent risk to consumers by taking a product off the market temporarily or permanently for a whole variety of reasons. The food, drink, tobacco, cosmetics and pharmaceutical industries are especially at risk of their products being contaminated. Incidents are becoming more and more frequent today, attracting media attention and so becoming matters of public knowledge. Quite apart from the loss of revenue and the costs incurred in recalling the goods, manufacturers also suffer serious damage to their image. A distinction is drawn between the contamination of products by accident or through negligence (APC) and their contamination through a deliberate and malicious act (MPT):

An international drinks manufacturer was obliged to recall fifty million bottles of mineral water in the USA alone after tests revealed trace amounts of benzene in the water. Media reports brought the incident to the public’s attention, with the result that global sales of 1.2 billion bottles dropped by half a billion in the next financial year. The company’s mineral waters division sustained a loss amounting to over a billion Swiss francs.

A few years ago, there was an increase in the number of incidents of extortion in which manufacturers of sweets received threats from criminals that their products would be injected with cyanide. Over thirty companies received such threats, and the whole industry saw its sales fall at once by over 40 percent; at least five firms went bankrupt, and the criminals were never caught. The companies were very hard hit financially by the costs involved – not only the costs of the recalls themselves, but also those incurred in rebuilding customer confidence and image generally.

AN ADDITION TO COMMERCIAL THIRD-PARTY LIABILITY INSURANCE THAT PAYS OFF

A manufacturer’s obligation to constantly check that their products do not put anyone in danger is a principle stipulated by law. However, conventional general third-party liability insurance covers manufacturers only when it is already too late and persons or property have already been injured or damaged. If a company is obliged to recall a product from the market to prevent that happening, a clause in its thirdparty liability policy is of little use. How, then, is a company to insure against costs incurred in the event of product recall or in the prevention of possible damages? Product Contamination Insurance is the answer.

Product recalls are a risk for small and medium-sized business as much as they are for big companies if they are engaged in the preparation, manufacture, processing, mixing, packaging, distributing or marketing of products. Industries particularly at risk include food, drinks, household goods, tobacco, cosmetics and pharmaceuticals.

COVER FOR THE MAJOR RISKS

YOUR ADVANTAGES AT A GLANCE

Are you interested in a collaboration or do you have any questions? Your contact person looks forward to hearing from you. 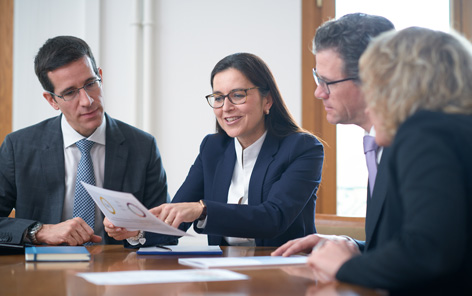 Talk to us about your concerns.